Good Morning—-It is Friday again and time to enjoy a little aviation history at the 3DB. This week we are going to go back and talk about the time when coast to coast travel was not a five hour event in the life of a traveler but instead was accomplished by train over a period of days; however, someone decided that maybe a plane/train concept would work and the rest of that story is aviation history at its best.

The article presented below is by George E. Hopkins and contains all of the facts. So, come with me now as we turn back the hands of time and revisit the beginning of a new era.

New York to Los Angeles in an unheard-of 48 hours! And what a way to go—luxuriously appointed planes, meals served aloft, and a window seat for every passenger.

It was midsummer of 1929, and all seemed right with the world. Herbert Hoover was in the White House, riding high on a tide of prosperity and popularity. A few critics muttered that stocks were dangerously overpriced, but to most Americans such foreboding seemed no more worrisome than a small cloud on a distant horizon.

To the businessman in a hurry, time was money. He needed to get there quick, and while trains in that day were marvels of speed and luxury, the best they could do for the businessman travelling from New York to Los Angeles was about seventy-two hours, and that involved a change of trains in Chicago. For the truly busy man all this constituted an intolerable delay when urgent affairs beckoned him from one coast to the other. Consequently it wasn’t long before rudimentary airlines began to blossom in the late 1920*5, eager to cater to these men on the go. But for the most part these early airlines were local affairs, suitable only for passengers who were both brave and hardy. It was inevitable that somebody would attempt a transcontinental air-passenger service as soon as developments in aircraft technology made such coast-to-coast service seem possible. Lockheed, Stinson, and Boeing already manufactured quality aircraft by 1929, but for the average American nothing attracted attention like Henry Ford’s magnificent Trimotor, popularly known as the Tin Goose.

Given the euphoric sense of limitless possibility that characterized the New Era (as businessmen liked to call the 1920’s), industries such as electronics, petrochemicals, and aviation attracted investors and entrepreneurs in record numbers, at least $550 million being invested in aircraft and related companies between 1927 and 1929. Moreover, the benign policies of the business-oriented administrations of Harding, Coolidge, and Hoover, attuned as they were to the subtle nuances of tax advantage and hidden subsidy, made the climate for “pioneering” as risk-free as it could possibly be.

It was obvious to many businessmen that the large bombing planes developed both here and abroad late in World War 1, which were capable of dropping heavy loads of explosives on distant enemy cities, might as easily carry commercial cargoes. With the Armistice, schemes sprang up simultaneously in many nations to do just that; but aside from mail service, commercial ventures in aviation foundered when no governmental subsidies were available and even air-mail services relied heavily on governmental support. Legislation, notably the McNary-Watres Act of 1930, changed the method of compensating the air-mail contractors from the “pound-mile” method to the “space-mile” method. That is, instead of paying the contractors for the actual number of pounds of mail they carried, the Hoover administration agreed to compensate them according to the amount of cargo space they made available for carrying mail, regardless of whether they carried any or not.

Obviously the McNary-Watres Act was a tremendous boon to the larger aeronautical enterprises, vastly encouraging the construction and operation of large trimotored aircraft. While this might seem like a rather straight-forward denial of the 1920’s ideal of unfettered, self-reliant free enterprise, in fact there was a certain harmonious consistency between these notions and the government’s policy. The man in charge of it all was Hoover’s Postmaster General, Walter Folger Brown. Brown feared that the nation’s air-transportation network might develop in the same inefficient, messy, illogical way that the railroads had, and he determined to use the financial clout of the federal government, through the hidden subsidy of air-mail payments, to force the nation’s airlines into cooperating with one another to form an integrated, effective nationwide service. He reasoned that as long as the Post Office paid merely for efficiency, in the form of low-cost open-cockpit single-engine planes designed solely for carrying mail, the contractors would remain content to live on governmental subsidy and would never bestir them to purchase the large multiengine aircraft that could lead to the profitable and safe transportation of passengers. Lines that geared their operations to passenger service would someday become independent of governmental subsidy, Brown believed, while small lines operating merely as mail carriers would never leave the federal dole. Of course Brown would have preferred that well-financed major experiments in passenger transportation succeed on their own, in classic laissez-faire fashion, but such was not to be the case, as the first transcontinental service would prove.

It was in July, 1929, just as the great bull market was reaching its climax that an air-rail passenger service called Transcontinental Air Transport, or TAT for short, presented itself to the travelling public, offering service across the continent. Its originator was a financier and former editor of The Wall Street Journal named C. M. (for Clement Melville) Keys. A protégé of the late James J. Hill, the railroad mogul, Keys commanded strong financial support. His decision to create the passenger service stemmed in part from a series of shadowy confrontations he had engaged in with Frederick B. Rentschler, a corporate genius who was then in the process of building what later became United Air Lines. After grabbing control of National Air Transport from Keys and his associates (in order to complete a transcontinental link for his system), Rentschler was overheard to say: “The air between the coasts is not big enough to be divided.” This remark added insult to injury, giving the whole affair rather sinister overtones reminiscent of the monumental battle between railroad “robber barons” Hill and E. H. Harriman for control of the Northern Pacific at the turn of the last century, and it spurred Keys to greater effort in his search for revenge.

Keys thought he saw an opening: if Rentschler’s United Aircraft and Transport Corporation had a weakness, it was that the entire operation was geared to carrying mail and high-priority freight rather than passengers. United would carry passengers, but only reluctantly, for its principal aircraft was the Boeing 40, an open-cockpit biplane that could in a pinch fit two people into a tiny cabin just aft of the engine—provided the space wasn’t taken up by extra sacks of mail. As for airport waiting rooms, baggage service, and the like, United couldn’t be bothered. What, Keys wondered, if he could create an air-rail line dedicated entirely to passenger service—a first-class operation over the relatively safe “southern route” across New Mexico and Arizona to Los Angeles? With the right backing he was sure it would work.

Using his connections, Keys secured support from General Motors, the Pennsylvania Railroad, and a powerful group of investment bankers known as Bancamerica-Blair. Before he was through wheeling and dealing, he obtained control of the Curtiss Aeroplane Company and combined it with the Wright Aeronautical Corporation to form the Curtiss-Wright Corporation—which was a great irony when one remembers that the Wright brothers and Glenn H. Curtiss had feuded bitterly for years, in court and out, over alleged patent infringements. From this base Keys moved to acquire dozens of lesser aeronautical concerns, ranging from local service airlines to aircraft-instrument manufacturers, eventually combining them all into one giant holding company, or trust, known as North American Aviation. It was this company that controlled TAT. Keys had a sense of public relations, and he took care to sprinkle his boards of directors with famous names, among them many a Vanderbilt and Rockefeller; but none of these names inspired the confidence among the public that one did: Charles A. Lindbergh. After careful negotiations, involving a complicated stock-sharing deal, Keys persuaded the famous “Lone Eagle” to lend his name and services to TAT. And so it was officially dubbed “The Lindbergh Line.” 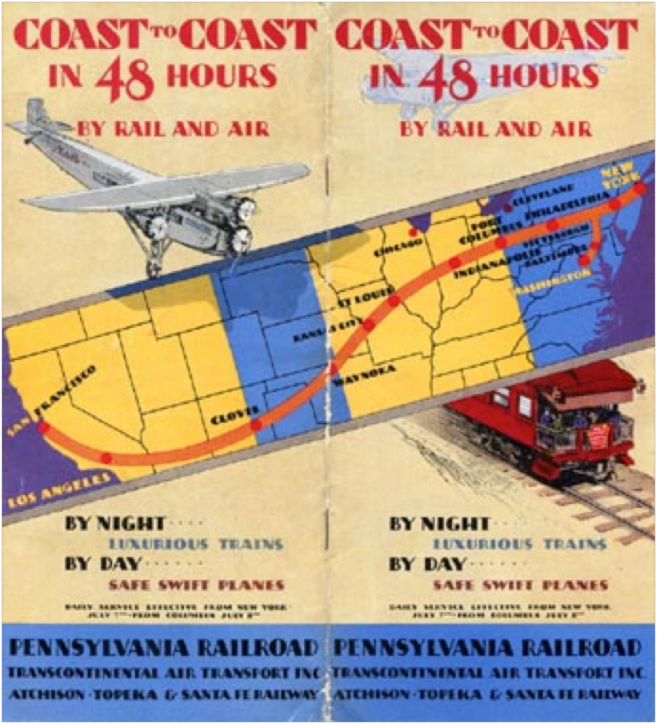 Next week we will continue our look back at the history of TAT but until then I wish for everyone the best that life has to offer and I hope that the weekend will allow you to have time with family and friends…………………….. Life is short but family, and good friends, will always be there – Good times or bad times.