Good Morning—time for a look at strange airplanes. Every month I try to look back and find a unique design, or prototype, to share with you and this week it is the Russian K-7. There are a lot of pictures on the web of this airplane but not everything you see is an actual historical photo although it appears so. Hopefully I have found the images that truly represent this unique seven engined albatross. 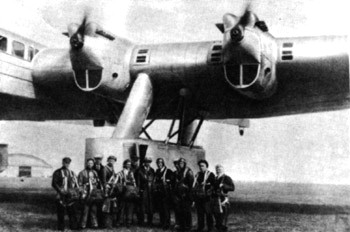 The early 30’s aviation design bureau, lead by K.A.Kalinin, was a capable aircraft design team. One of their projects was a 3-engined passenger aircraft, the K-7, also designated as “K-Tjazholij” (K-Heavy) for the new 500 hp German BMW “Hornet” engine. It was designed to carry 22 passengers. The mock-up prototype was tested in the TSAGI wind tunnel in September 1928, and was approved for production by the Scientific-Technical Committee VVS in March following year.

However, production was not started, and the designation K-7 was used again for a transcontinental aircraft project, begun in 1928. ‘The idea to build K-7, (K.A.Kalinin wrote later), came to me long ago, as early as 1925. In 1929 the project was formulated and after two years of refinement it started to come to life… With the larger engines available it was possible to consider building aircraft capable of much greater carrying capacity. This led to the design of a flying wing. The new philosophy was “everything is in the wing”‘.

The original aircraft design was all-wood with a 5-spar wing. But it became clear that it would suffer from lack of strength, and after much discussion, K.A.Kalinin decided to switch to an all-metal welded construction with a 3-spar wing.

The K-7 was a gigantic elliptical wing of extremely thick airfoil (span 53 m, area 452 m2) with two triangle section tail booms, carrying tail fin and tail plane with control mechanisms. The straight wing (width 6 m, length 10 m, height 2.33 m) had room for payload and people. Elliptical consoles with 14 fuel tanks were attached to the center-plane. The center was covered with dur-aluminum, consoles with fabric. There were no thick tubes able to comply with the requirements of the central spar so it was made of two parallel tubes. The rest of the wing frame also was made of welded steel tubes.

A nacelle protruded from the leading edge, with a cockpit for two pilots, navigator, radio-navigator and chief mechanic. Seven more crew members were located in other sections of the aircraft and communicated by internal telephone.

Have a good week, enjoy the photos, and be sure and read the article this Friday when I will be talking about…………………….. 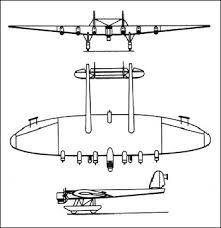 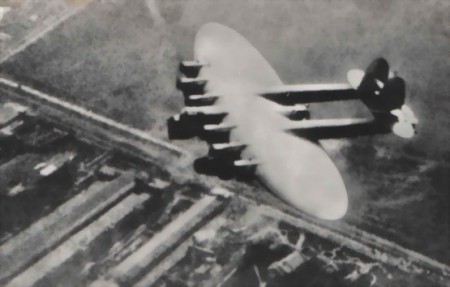