Today we continue our series on Transocean. This will be part four and I will have three more postings and instead of a weekly post these post will be daily———-Enjoy.

Transocean’s first commercial contract was a round-trip charter between the U.S. mainland and the Philippines in June 1946, not long after the start of the ATC contract. Nelson negotiated with a Filipino newspaper publisher, a Dr. Yap, to fly to Manila a group of his countrymen who wanted to participate in the first Independence Day activities on the Fourth of July 1946. But the modification center in Van Nuys, California was unable to finish on schedule the conversion from cargo to passenger configuration of either of Transocean’s two aircraft. As a consequence, TAL lost the job. The Philippine contingent had to find its own transportation to Manila. With help from Washington, D.C., most were able to hitch rides on ATC planes. 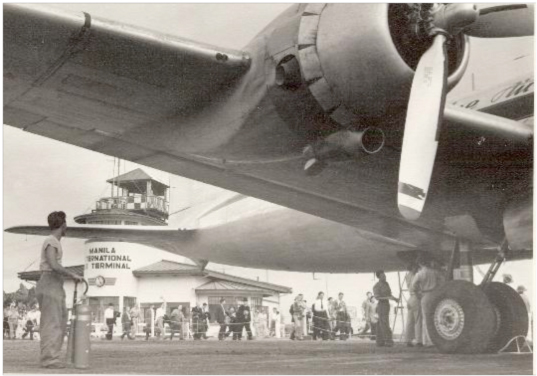 Finally, the conversion work on one of the C-54s was completed during the first week in July and Nelson sent it to Manila to bring the Yap Group back to the states. It turned out that Colonel Andres Soriano, president of Philippine Air Lines and owner of the San Miguel Brewery, had seen the TAL DC-4 leave Manila with Dr. Yap’s passengers, and he called Nelson from Manila to find out if he would set up a transpacific charter service with him under Philippine Air Lines sponsorship. After Nelson paused briefly to contemplate the proposal, he and Soriano agreed on two trips. An extension of the contract would have to be preceded by further discussion. Colonel Soriano wanted to start the charter service immediately. This news touched off a flurry of activity at Transocean’s headquarters in Oakland. The airline’s second C-54 was still undergoing modification to DC-4 standards in Southern California. The first aircraft, now back from Manila, was still equipped with bucket seats, and there was insufficient time to install regular passenger seats.

On the night of July 22, the TAL employees were in high spirits as they set out to fix up the plane for the first trip under contract to Philippine Air Lines. Bill Rivers, the airline’s new purchasing agent, spent the night on his knees padding the seats with foam rubber while Flight Engineer Jim McCoy fastened the headlining. People from administration, operations, maintenance, and several flight crew members assisted as needed. When their work was nearly completed, they put air mattresses aboard so the passengers could spread them out on the cabin floor and stretch out to sleep. Because Colonel Soriano would be meeting the flight, Nelson decided to fly the DC-4 himself. It would be a good time to cultivate their relationship and develop more business with Philippine Air Lines. His wife, Edie, accompanied him on the trip and served as stewardess. It was morning before the last of the work had been finished on the DC-4, and it was ready to fly. Nearly every employee-even their husbands, wives, and children – showed up to give an enthusiastic send-off to the DC-4, which had been named Miss Independence for the Yap charter flight, now renamed Taloa-Manila Bay to honor the new service. The load consisted of thirty-five passengers and a small quantity of freight. Transocean’s first commercial flight gave the Philippines its first post-war air link with the United States. Edith Nelson had the distinction of being the first stewardess to complete the Pacific crossing for a commercial airline as Pan American employed only male stewards at the time.

Later, after Transocean sold PAL two DC-4s in return for a considerable block of stock in the Philippine airline, PAL canceled a contract it had given Trans World Airlines for the management of PAL’s domestic runs on the islands and gave the contract to Transocean. United Air Lines lent to Transocean John Hodgson, one of their captains, who had been manager of United’s Alaskan operation during the war, to go to the Philippines and establish the domestic division of PAL. He was in Manila for a year when Nelson sent Sam Wilson to take over the operation. Eventually, Nelson, Sherwood Nichols, and Ed Ringo worked out a contract with Soriano for the establishment and operation of a Philippine Air Lines international service to the United States, the Orient, and Europe. In the months following those first flights to the Philippines, however, N66635, referred to within the airline as 635, was the most widely known and flown aircraft in the Pacific. During the late summer and fall of 1946, aircraft 635 was the only commercial channel of communications between the United States and the Orient. This was because Pan American had suspended its operations and a maritime strike put the ships at anchor. That single DC-4 played a dual role carrying the flags of both the United States and the Philippines. Adding to the mystique already surrounding Transocean were the quick-change paint jobs given 635 every time it arrived in Manila. As soon as the engines were shut down, a crew of painters would rush to paint over the TAL lettering to read “Philippine Air Lines” before departure time to the Orient. This created the impression along the route that Transocean had an entire fleet of aircraft servicing the South Pacific.

The TAL-PAL combination began service to Shanghai in September of 1946 and to Bangkok in November. On this route between Honolulu and Manila, Nelson used double crews, each crew consisting of captain, copilot, radio operator, navigator, and flight engineer. The first crew would fly the aircraft from Honolulu to Wake Island, where the second would take over en route to Guam. Then the first flight crew would again take command for the journey to Manila. After a 24 to 48 hour layover at each station, the two crews would alternate in flying the aircraft. Some flights would continue on from Manila to Shanghai, Bangkok, or Karachi. The double crew concept was a novel idea later to be used by other airlines.

Tomorrow we will continue with our story so stay tuned. Take care, fly safe, and remember you are a “Gatekeeper.”