I have a few more current events that I would like to share with you but I think I will generate a few extra blog articles during the coming weeks to share these with you. Today I want to begin a series on a supplemental air carrier who was denied the chance to compete as a scheduled carrier by the CAB. This is history that is worth knowing. The airline I speak of is TRANSOCEAN and I was introduced to their story in a book by Ralph Lewis titled “By Dead Reckoning” which I recently read. All that I present will be a copy of what can be found on their website and hopefully I create an interest that will move you to do some reading/research on your own.

Now—-let’s learn about a great airline.

Captain Orvis Marcus Nelson, later to become the founder of Transocean Air Lines, was a veteran pilot flying for United Air Lines when the United States entered World War II in 1941. He had then been assigned to fly for The Air Transport Command (ATC) of the U.S. Army Air Corps under a contract held by United and was one of the civilians flying the C-54 four-engine transports in conjunction with “The Purple Mission.” This was the code name for the landing, set for November 1, 1945, of the first wave of occupation troops. Okinawa, the island nearest to the Land of the Rising Sun, had been designated as the staging area for “The Purple Mission.” Servicemen, supplies, and what seemed to be every C-54 transport in the world had been amassed on the island in preparation for the invasion of Japan before the atom bomb ended the need for a land invasion.

Nelson was in flight between Guam and Kwajalein when the first atom bomb was unleashed over Japan and between Kwajalein and Johnston Island when the news of the bomb was broadcast. By the time he arrived at Honolulu there were indications that Japan might surrender, and he was directed to return his aircraft to Okinawa. Grounded on Okinawa in mid-August, Nelson and several other United crewmen sat around talking, killing time while waiting for back-to-back typhoons to wear themselves out. In the group were Sid Nelson, who had been active in the Air Line Pilots’ Association with Orvis and who would become a director of TAL; Harry Huking, a senior United pilot; and radio operator Sherwood Nichols, destined to be secretary-treasurer and one of the original directors of the airline. In the light of a single candle, with torrential rain and wind battering the canvas Army tent they occupied near the Yontan Airstrip, the conversation quickly turned to the usual topic-what to do after the war ended. Most of the men had had a taste of flying to exotic places in all the corners of the world, and they did not want to let go of that thrill. If at all possible, they wanted to continue flying for commercial airlines. Nelson reasoned that it would undoubtedly be a long time before the Japanese would be permitted to have their own domestic airline and he suggested that someone from the group propose to United Air Lines to either extend its routes across the Pacific to the Orient or organize a domestic airline in Japan. If either idea proved unacceptable to United management, Nelson felt that the next step should be to try to set up a Japanese airline themselves. The men agreed with the plan and decided there in the tent to form an association. Each member agreed to put up money if and when the time came to do so. The name they chose was ONAT for Orvis Nelson Air Transport Company, and they elected Nelson their representative to contact United. United’s “Pat” Patterson rejected the proposal to extend its service to Hawaii or to establish a domestic airline in Japan. However, he did help Nelson by providing him with a letter of introduction to General Douglas MacArthur, the Allied Supreme Commander in charge of the reconstruction of Japan and from whom permission for the venture would be required. Nelson then went to an old friend, Colonel W.E. “Dusty” Rhoades, who had been MacArthur’s personal pilot throughout the war, and asked him to explore the project with the general in Tokyo. The answer was again discouraging. MacArthur rejected the proposal, saying he thought it inadvisable to set up an American carrier in Japan until a formal peace treaty was signed. Disappointed by his failure to interest either United or MacArthur in their plans, Nelson shelved the Okinawa group’s idea.

By early March, Nelson was back flying United’s Denver-to-San Francisco route when he received a call from Jack Herlihy, vice-president in charge of operations for UAL. Herlihy asked Nelson how soon he could organize a flying operation in the Pacific for the ATC under a subcontract from United to provide twice-daily transport service between Hamilton Field near San Francisco, and Hickam Field, Hawaii. Nelson jumped at the opportunity without concern for “how soon.” He knew he could do it. Herlihy offered to lend key personnel to begin the organization and told Nelson that negotiations were already under way for the lease of twelve surplus U.S. Air Force C-54s. Then he issued a nearly impossible demand: position the first airplane in Honolulu in time for a return flight to the West Coast on March 18. This meant that Nelson, a pilot without an airplane or a hangar to put it in, had just ten days to construct an airline. Nelson began moving at top speed within seconds after his conversation with Herlihy.

He first called his wartime radio operator, Sherwood Nichols, who was then working as a station attendant for United at Boise, Idaho. Nichols immediately agreed to join Nelson as chief of communications. The next items on Nelson’s agenda were to locate the rest of the Okinawa group, borrow the United men Herlihy had promised, place classified ads for flight crews in the San Francisco and Los Angeles newspapers, and then telephone Hamilton Field to inform them he was in business. To his surprise, this news had already reached the installation earlier in the day. Base personnel told Nelson that some fifty demobilized pilots were already on their way to apply for jobs. Several thousand telephone calls for Nelson were received at his San Lorenzo, California, home during the first twenty-four hours of his search for flight crews, setting a record at the local telephone company for the most calls ever routed to a residence. 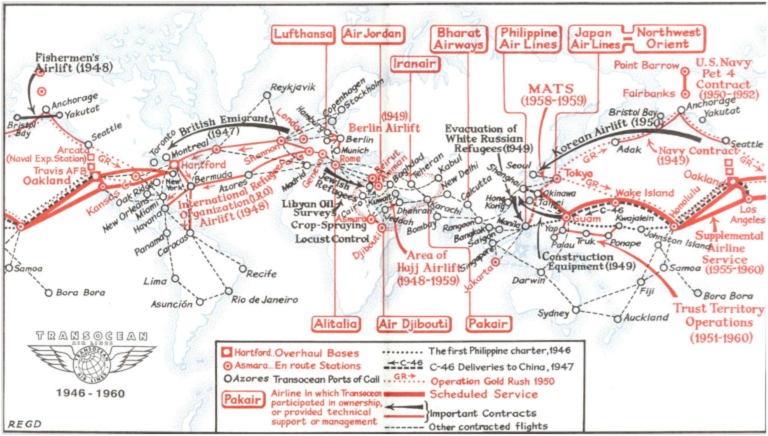 Normally I would continue this series next week but I am going to deviate and over the next six days I want to complete this, do a few more current events the following week and then move on to the series on Delta which will probably finish out the year. Below are a few pictures of TAL aircraft to finish up Part One. Until tomorrow—-take care and fly safe. 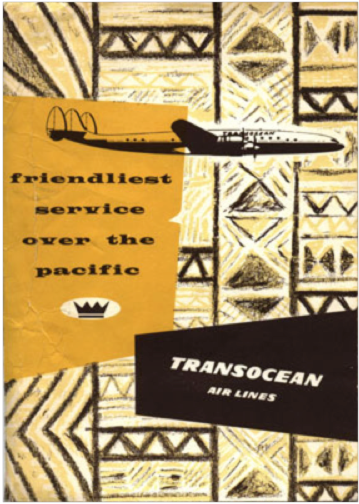 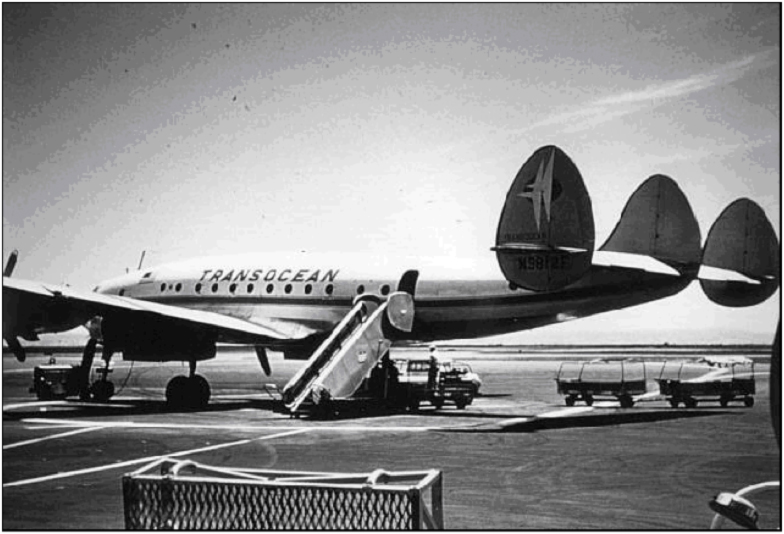 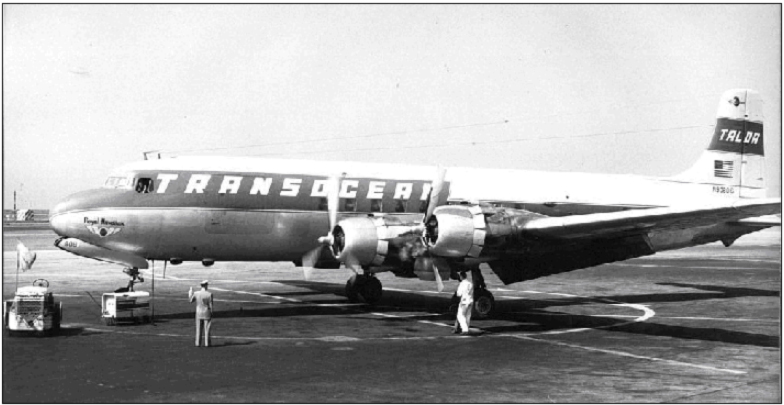 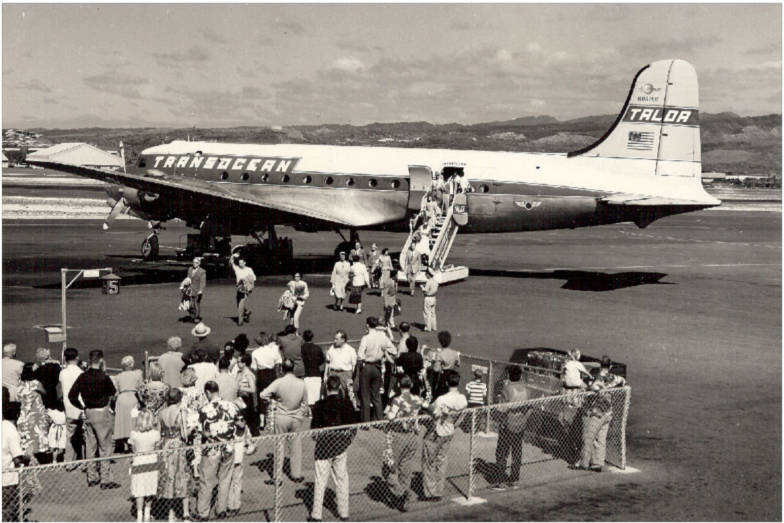