Today we continue our series on Transocean. This will be part six and I will have one more post tomorrow and then wrap it up. ———-Enjoy.

Around the World with Transocean Air Lines

The year was 1949. The governor of French Somaliland was envious of Ethiopian Air Lines and the British Aden Airways flying in and out of Djibouti with big cargo loads. But French Somaliland had no money, and France gave little encouragement for the country’s future. The governor asked John Russell, a Trans World Airlines (TWA) employee then serving as operations manager for Ethiopian Air Lines, if he would form a national airline using the name Air Djibouti. “We would be the carrier for the country, and this would provide us the necessary reciprocal landing rights in foreign countries,” said Russell. “The possibilities of using C-46s for cargo were apparent to lower the ton/mile cost.”

“Bill Pearce, who was with Ethiopian in Addis Ababa, and I decided to look for financing for Air Djibouti. We found a listener in Orvis Nelson of Transocean Air Lines. “One of the reasons Nelson was willing to proceed was that our government was offering new C-46s, including spares, for $300 a month with the latest Pratt & Whitney engines and three bladed props, not the troublesome Curtiss Electra props previously used.”We started with two aircraft (one had 3.4 hours flying time, the other 4.5 hours) and modified them at Transocean’s base at Bradley Field, Connecticut. “Bill Glenn and I took the second plane over in midwinter. We had an engine change at Goose Bay, Labrador, with two feet of snow on the ground. Glenn, with the help of the military, did the job in less than two days in sub-freezing temperatures, which was an outstanding feat.

“Our next stop was at Thule Air Force Base in Greenland, and then continued to Shannon, Ireland, and on to Rome, where we picked up my wife and ten-month-old daughter and flew to Asmara, Eritrea, on the Persian Gulf. This was to be our home base as it was under the control of the United Nations and because there was no housing available at Djibouti. “Verne Shrewsbury, who had preceded us with the first C-46, had everything organized on our arrival.”From its headquarters in Asmara, Air Djibouti DC-3s ferried fresh meat and vegetables from the plentiful East African plateau country to the desert outposts of Saudi Arabia, its capital city Riyadh, and to the Arabian-American Oil Company (ARAMCO) installations around Dhahran. Air Djibouti airplanes also transported cargo and conducted (in conjunction with Nairobi Air Services of Nairobi, East Africa) big game camera or shooting safaris from Saudi Arabia to the Nairobi area. Brochures advertising the tour service stated that Air Djibouti could fly passengers to “the exciting land of safaris, trout fishing, sailing, surf bathing, underwater fishing, and glamorous evenings in just twelve hours-ten times faster than the old Magic Carpet record.” The operation also flew religious pilgrims from Kabul, Afghanistan, to Jeddah, Saudi Arabia. From Jeddah they would continue to Mecca on foot because non-Moslems were not allowed in the holy city.

The crews had to carry five-gallon or thirty-gallon drums of gasoline to have fuel for the return leg to Asmara after delivering the hajjis home, which was quite a logistic problem. “In the middle of this operation I received a cable stating that the government of French Somaliland had been overthrown and that the governor had been assassinated. It closed with the command: DO NOT LAND IN DJIBOUTI. “Three countries – Egypt, Lebanon, and Jordan – were considered as possible bases from which to operate our charter business since we were no longer able to land in Djibouti. In December 1951 Libya attained its independence as a constitutional monarchy after years of rule by Italy and after the end of World War II by a British mandate. This North African desert country with a coastline on the Mediterranean Sea is inhabited mainly by wandering Bedouin tribesmen. In the extreme south live the veiled Tauregs. Air Jordan was called upon by Libya for assistance in its race to develop its oil fields. Its services were used by Mobil oil of Canada, Continental Oil Company, Caltex, Standard Oil of Indiana, and Robert Ray Geophysics, Inc., in addition to ARAMCO. Scheduled flights by Air Jordan provided supplies and services to the desert oil camps. In addition to the cargo, Air Jordan carried oil crews who were given one-week furloughs in Tripoli or Benghazi at the end of every four weeks of work in the desert.

Publicity for Transocean Air Lines often took creative turns as well. For example, Transocean’s Dave Gregory capitalized on the fact that the air route from Cairo to Jerusalem passed over the Dead Sea at 1000 feet below sea level. Dave founded the “Below Sea Level Flying Club.” Several hundred bright yellow membership cards were printed with the Air Jordan logo which certified that the card holder was a qualified member of the exclusive club and had the right to ask: “How low can you get …and still fly?” The club’s cards were the topic of conversation among flight crews and seasoned travelers of other airlines transiting the Middle East. Surprisingly, this club generated considerable business for Air Jordan. 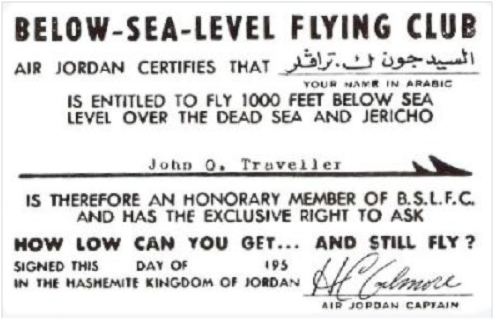 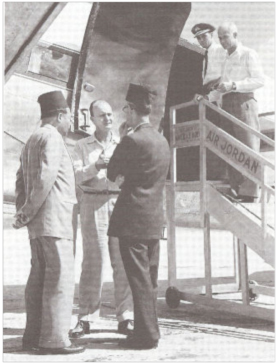 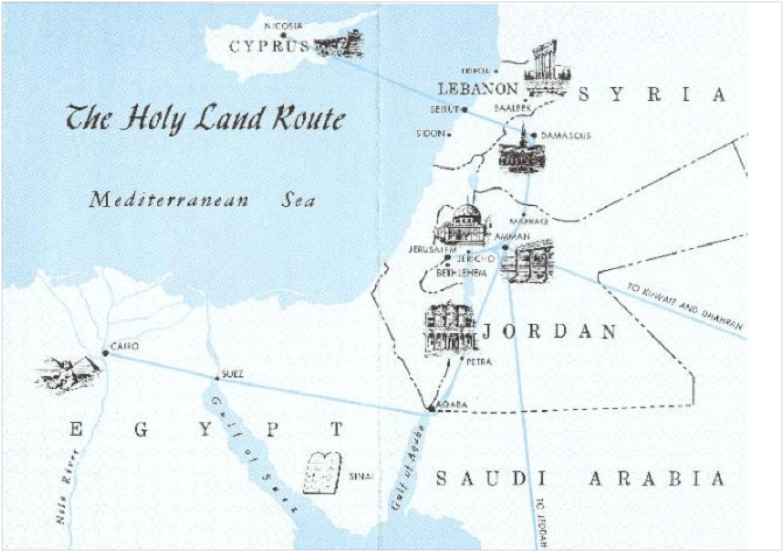 Tomorrow we will finish with our story so stay tuned for the wrap up and a recommended reading list on Friday. Take care, fly safe, and remember you are a “Gatekeeper.”