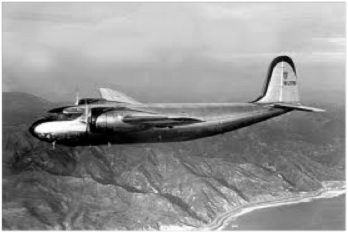 Another week is coming to an end and in another fifteen days we will greet the New Year. They say as you get older life gets easier—not true. I think there was a time when this was true but for most of us, who are forty plus, things don’t slow down. Hope the week was good for you and today what I want to talk about is the DC-5 and Transocean. I did a series on Transocean earlier in the year and I want to share this with you again. But first, let’s talk about the DC-5.

The DC-5 was a 16 to 22 passenger twin engine transport with a high wing and a tricycle landing gear. Douglas designed the DC-5 to use many of the same parts as the DC-3, to minimize spare parts cost for the airlines, but had a hard time selling their new product. The DC-5 was conceived as a short haul aircraft that would serve out of the way communities thereby relieving the DC-3 to serve medium range routes, and the DC-4, under development, would be used for transcontinental routes.

The major issue that Douglas had to overcome first was an aerodynamic buffeting with the tail. The engineers finally plotted the wake from the wing and engines correctly, as it hit the tail, made changes in the tail and engine nacelle and once this was corrected it was up to sales to promote the safety and performance of the new design; however, the airlines were less than enthusiastic.

The sales force simply received more orders for the DC-3 and when the airplane was presented to American Airlines they ordered ten more DC-3s and would not even consider using the DC-5.

Douglas manufactured twelve DC-5s. Three airlines, KLM, Penn Central, and SCADTA, and the US Navy and Marines bought these. Once it was clear that the US was going to enter the war Douglas stopped production on the DC-5 and changed over to production of the A-20 bomber.

A good place to start your search for facts is here, FACTS, and for a video I have nothing for the DC-5 but I found an interesting VIDEO from Pan AM, circa 1946, that promotes their service to Alaska.

Now, let talk about Transocean—The following is the opening paragraph of part one and then a link will take you to the complete article. This is a seven part series.

Today I want to begin a series on a supplemental air carrier who was denied the chance to compete as a scheduled carrier by the CAB. This is history that is worth knowing. The airline I speak of is TRANSOCEAN and I was introduced to their story in a book by Ralph Lewis titled “By Dead Reckoning” which I recently read. All that I present will be a copy of what can be found on their website and hopefully I create an interest that will move you to do some reading/research on your own.

Have a good weekend, finish up with your shopping, and then take a break and enjoy time with friends and family. My best to you and yours and I hope to see you here again next week.