Douglas Introduces the DC-6 to Compete with the Constellation and the Stratocruiser - January 21, 2011 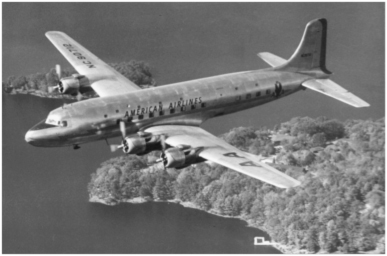 Good Afternoon to you—A little late with the blog this week because of a late arrival from my trip as well as a technical problem with the website; however, the internet gurus that maintain my site have fixed the problem—Thank you Ticode. I did not do as much work as I should have the last two weeks but I am hoping to finish up with the research on Alaska Airlines this week so that next Friday I can begin that series. So, let’s talk about the DC-6 this week and get acquainted with one of the first true long range, land based, airplanes.

We have talked previously about the Douglas series aircraft and the DC-6 is a refinement to the DC-4 which Douglas brought to the market place to compete with the pressurized aircraft of Boeing and Lockheed. The DC-6 used the same wing as the DC-4, was slightly longer, and had larger engines which allowed for a substantial increase in speed and altitude performance. A good place to find a few facts is here at FACTS.

The first video I would like you to take a look at is one that showcases the new Douglas Airliner to the world. This video can be found here—VIDEO-1.

The next video is on President Truman’s airplane which was a DC-6. As you may remember, President Roosevelt was the first sitting President to use an airplane for the business of the country. His DC-4 was called the “Sacred Cow” and he only used the airplane once and this was when he attended the Yalta Conference in 1945. One unique feature of FDR’s airplane was that it contained an elevator to lift him in and out of the airplane, while seated in his wheelchair, out of the public’s view. After FDR’s death President Truman used FDR’s airplane but in 1947 he replaced this airplane with a modified C-118 Liftmaster, DC-6, and called it the “Independence,” after his hometown in Missouri, and had a distinctive bald eagle head painted on its nose. This video can be found here—-Video-2. This video has some additional footage added on that has nothing to do with “The Independence” but is a good advertisemant for someone.

Have a good weekend and I look forward to being back with you next Friday when we begin the series on Alaska Airlines. Take care, fly safe, and a quick reminder to one and all that we Aviators are the “Gatekeepers of the Third Dimension”. Not the FAA, not the board of directors at an airline, or any other bureaucracy.

Interesting Photos of the DC-6