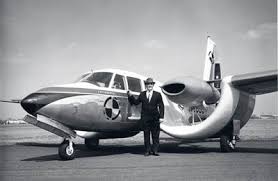 Good Morning and welcome back to the 3DB and the New Year. Hope everyone enjoyed the festivities of the season and are ready to get back to work. This year I am going to begin each month with an article about an airplane from the past and the very first airplane I want to talk about is the “Custer Channelwing.”

The story of the “Channelwing” began in the 1920s when William Custer discovered, by accident, that it was the speed of the air over the lifting surface, and not the speed of the lifting surface through the air that created the most lift; however, this was Bernoulli’s principal at work in both cases. Custer settled on the idea of pulling air through channels, that were in fact the lower half of a venturi tube, and by reversing the normal method he found that the channels produced lift – a lot of lift.

Below is a link to a good website that has the history of Mr. Custer, and his “Channelwing,” as well as a link to a video from the Discovery Channel website. Take some time to explore the concept and see if you think that Mr. Custer is an aviation pioneer or a ……………

Have a good week, take care, fly safe, and thanks for letting the 3DB be a part of your week.