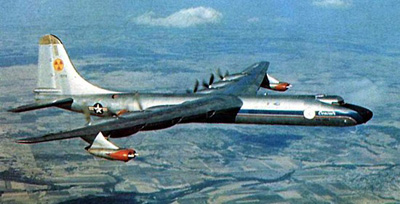 Happy Friday—welcome back to the 3DB where this week we are going to talk about nuclear powered aircraft. I have no background on this program, other than what I read while doing the research, so the concept was new to me. I guess if they can power a submarine then why not an airplane?

The American Quest for a Nuclear-Powered Plane

At the height of the Cold War, U.S. Air Force scientists dreamed of a fleet of nuclear-powered aircraft. They almost made it happen.

It was 1955. The atomic power industry was maturing in the United States, and President Eisenhower had already made his call for “atoms for peace.” The industrial race to domesticate the atom was underway.

The military race to employ to our nation’s defense was already more than 15 years old.

“Popular Mechanics” painted visions of a helpful “nuclear genie” that included everything from nuclear-powered excavation to atomic-powered homes. The atom was being trained to become man’s best friend.

Meanwhile, the U.S. Navy had its nuclear-powered vessels like the U.S.S. Nautilus – the Navy’s first nuclear-powered submarine. Down the hall in the Pentagon, Air Force leaders wanted a nuclear-powered craft of their own for similar reasons – unlimited range, power and endurance.

The interest in atomic-powered aircraft began in 1946 in the Nuclear Energy for the Propulsion of Aircraft (NEPA) program managed by the Army Air Force and later the independent U.S. Air Force. By the end of 1948 the U.S. Air Force had invested nearly $10 million. While experts prepared extensive studies on their feasibility, actual aircraft development waited until after 1951 when the Aircraft Nuclear Propulsion (ANP) program replaced NEPA.

Manned nuclear aircraft pose the most difficult engineering development job yet attempted with in this century,” said ANP Director B.C. Briant in 1954.

The difficulty didn’t stop the Air Force and its team of scientists from trying.

In 1952, the Air Force started the X-6 program to produce two flying test beds powered by atomic energy. The Air Force chose a modified Convair B-36 “Peacemaker,” designated the NB-36H. Only one of these special aircraft ever made it to testing – Serial No. 51-5712, the Nuclear Test Aircraft (NTA).

The NB-36H carried a small air-cooled reactor in the aft bomb bay. The NTA had shielding around the reactor itself and a totally new nose section, which housed a twelve-ton lead and rubber crew compartment. In the fuselage and behind the crew compartment, designers installed water jackets to absorb radiation. Due to the modifications only the pilot and copilot could see through the foot-thick, leaded-glass windshield. A closed-circuit television system allowed the crew to check the reactor as well as other sections of the aircraft.

Between 1955 and 1957, the NTA made 47 test flights yielding valuable data on the effects of radiation upon airframe and components.

The United States had competition in creating atomic-powered aircraft. The Soviet Union operated a similar test program. One Soviet plan envisioned a “flying boat.” In the plans for the aircraft “the wing span was more than 130 meters, and the total power of the engines exceeded one-half million horsepower. This airplane was supposed to carry 1,000 passengers and 100 tons of load at a speed of 1,000 kilometers per hour” according to R. G. Perelman in “Soviet Nuclear Propulsion” (1960).

In late 1958, “Aviation Week” reported that the Soviets successfully flew a prototype of an atomic-powered bomber. This report, accompanied by the general paranoia created by Sputnik and the enthusiasm of a technological race, temporarily fueled ANP to increased budgets.

But, the enthusiasm would not last. In the end, the program produced too few results over too long a period. The development of accurate and powerful missiles and the growing emphasis on space also lessened the appeal of atomic-powered aircraft. On March 28, 1961 President Kennedy canceled the ANP program writing, “Nearly 15 years and about $1 billion have been devoted to the attempted development of a nuclear-powered aircraft; but the possibility of achieving a militarily useful aircraft in the foreseeable future is still very remote.” President Kennedy redirected much of the effort toward space and the race to reach the moon — an effort and endeavor that captivated the American imagination, public support and eventually succeeded.

Fascination about a potential nuclear power that might offer limitless energy led the United States Air Forces commenced in 1944 as an experimental program, designed to produce an operational nuclear powered bomber. The idea of nuclear propulsion energy to power an aircraft dates back to 1942 when Enrico Fermi, one of the fathers of the atomic bomb, discussed the idea with members of the Manhattan Project. For the first two years, engineers were immersed on the issue of how radiation would affect the performance of a flying platform, its avionics, materials, and more importantly, its crew. The program seemed lost in endless detailed fights and controversies, when in 1947, it received new life. The newly formed U.S. Air Forces decided to invest the necessary resources to make the program feasible. Allocation for ten million dollars was promptly made available to the program. From early 1948 to 1951, extensive research was made in reactor technologies and engine transfer systems; the backbone of the nuclear powered aircraft. Many configurations were proposed, Dual reactor, combination (chemical and nuclear) and single systems were tested. Eventually it was decided that a single reactor would provide the aircraft with the necessary flight reliability. Next came the debate about what type of transfer mechanism would be implemented. Transferring nuclear power to a conventional engine had long been seen by engineers as the main obstacle in the development of the program.

n 1949, the program ran a series of tests, known as the Heat Transfer Reactor Experiment (HTRE), involving three types of reactors, with the purpose of determining the most efficient method of transferring energy from the reactor. After an extensive trial series, the HTRE-3 emerged as the selected transfer system. The HTRE-3 was a Direct-Cycle Configuration. In a direct cycle system, the air entered the engine through the compressor of the turbojet, it then moved to a plenum intake that directs the air to the core of the reactor.

At this point the air, serving as the reactor coolant, is super-heated as it travels through the core. After that stage, it goes to another plenum intake; from there the air is directed to the turbine section of the engine and eventually to the tailpipe. This configuration allowed the aircraft engine to start on chemical power and then switch to nuclear heat as soon as the core reached optimized operational temperatures, thus providing the proposed aircraft the ability to take-off and land on conventional power.

Another system considered was the Indirect-Cycle Configuration. In this configuration, the air did not go through the reactor core, air instead passed through a heat exchanger. The heat generated by the reactor is carried by liquid metal or highly pressurized water, to the heat exchanger where the air is, thus heating the air in its way to the turbine. Engineers preferred the direct-cycle approach due to the fact that was simpler to produce; program managers preferred the idea because its development time was relatively short compared to the indirect system.

Enjoy the weekend, enjoy time with friends and family, and be safe/fly safe.