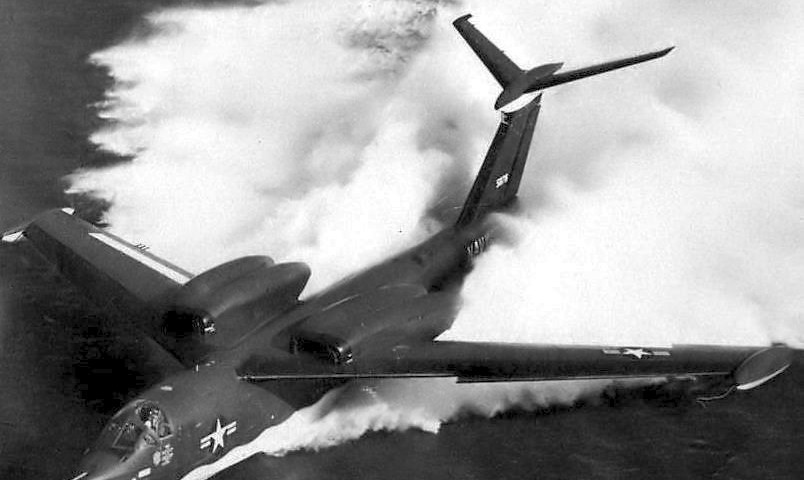 The race was on, during the 50s, and the US and Russia were determined to outspend one another based on ideology. The USAF brought NORAD to life, the DEW line was put in place, and the B-52 became the Strategic Air Commands new intercontinental bomber replacing the B-47; however the USAF was not the only player.

The US Navy decided that the newly formed USAF was not going to have a monopoly on strategic deterrents and initially proposed a super carrier, USS United States, but budget limitations, and opposition from the Air Force bomber lobby, stopped development on the super carrier. The Navy Bureau then developed the concept of a “Seaplane Strike Force” centered around development of large jet powered seaplanes whose performance would be equal to, or better, than the land based jets with the ability to operate off of most of the world’s surface with only a tender, or submarine, needed for re-arming and re-fueling. Interesting concept, especially from an economic point of view, that would put the Air Force at a real disadvantage—-maybe.

The request for proposal was sent out to the industry in 1951with Convair and Martin taking the lead. The competition was won by Martin and they were awarded a contract for two prototypes and up to twenty-four production models. Martin then named its new aircraft the “SeaMaster” and the US Navy was officially in the bomber business much to the chagrin of the US Air Force.

Now, what about this new seaplane?

The Martin P6M SeaMaster prototype made its first test flight on July 14, 1955. During flight testing, speeds in excess of 600 mph (966 km/h) were claimed. It embodied all the design features developed during World War II and immediately after the war. In 1952 Martin was awarded a contract, first, for a design study, and then a production contract for two prototypes known as Model 275. They would be modern in almost every way, despite their untimely destruction during tests.

It had a T tail configuration and a high length-to-beam ratio of its 134 ft (40.84 m) hull. The engines were mounted in such a way as to prevent ingestion of the water spray pattern into the engine air-intake ducts and the wing-tip floats were integral, enlarged parts of the drooped wing configuration. These floats served additionally as wing-tip plates and in the mooring and docking of the SeaMaster they played an important role in picking up the mooring buoy which was the key to swinging the aircraft, almost automatically, into the floating beaching gear or into a dock, whichever system was being used at the time. Also incorporated in the design of the P6Ms was a watertight rotary bomb bay. This could be flipped over in flight to expose the bomb racks which could be loaded on the inside of the hull with bombs, mines, cameras or other ordinance stores.

As most of you may know I am a big fan of seaplanes and the concept put forward by the Navy should have been a winner for the US but in 1960 the contract was cancelled. There were lots of problems which caused setbacks as well as budget constraints; however, I think that which caused the cancellation was the development of the Polaris ballistic missile on board submarines and the nuclear powered carrier, USS Enterprise, which would have long range nuclear strike aircraft on board.

An interesting footnote to this story is a recent article I found on the Caspian Sea Monster. I wrote an article on this some time back and it turns out the Russians have decided to/tried to revive this program.

The Russian government has commissioned the renewal of the “Caspian Sea Monster,” the legendary ground effect vehicle (GEV). Only 30 such crafts were built in the Soviet Union over two decades.

The revival of GEV production was announced by the Alekseev design and construction bureau, which used to be the leading producer of such vehicles. According to its production branch director, Evgeny Meleshko, the bureau is working on a big model. It will spend two years making the new design with the first tests to be launched in 2012.

“For our company it’s a big project, and most of our specialists will be working on it,” Meleshko told Interfax news agency.

GEVs are high-speed naval vehicles that fly just over the surface thanks to a high-pressure air cushion created by its wings. The first prototype with a wingspan of 37.6 meters and a hull length of about 100 meters could travel at 250 knots and had a maximum take-off weigh of 544 tons.

The Soviet Union produced several models, including one for amphibian troops transportation and a cruise missile carrier. There was also a project for a strategic GEV armed with ballistic missiles.

I hope everyone has a good weekend and enjoys a little time with family and friends. Thank you again for making the 3DB part of your week, please be sure and take a look at the video on the “SeaMaster” below, and I wish you, and yours, only the best that life has to offer.