Good Morning and welcome to the 3DB. I hope the week was not to taxing on the spirit and you had some time to enjoy life. This week we will finish up the series on United Airlines and the ads that I have offer a window in to the past that words cannot duplicate.

The Jet Age is the time period right after World War II when major airlines began introducing turbine powered planes into their fleet. These planes were capable of flying much faster, higher and farther than piston-powered aircraft and could easily make transcontinental and intercontinental flights with few delays. Still, United Airlines entered the Jet Age much later than other airlines. This was because United was an early customer of the Douglas DC-8 which was released several months after the Boeing 707 that was adopted by many other major airlines.

Still, United maintained many of its early routes operating in and around the West Coast, Midwest and Mid-Atlantic States. It also managed several transcontinental flights through Denver, Colorado. Denver continues to be of United’s major hubs t this day.

United Airlines continued to grow and expand, and would continue competing with other major airlines through the Jet Age. In 1951, the airline ordered 30 twin-engine Convair-Liner 340s for $16.5 million and later increased its order to 55. It was soon operating DC-4 Mainliners that would be able to fly coast-to-coast in just 14 hours.

In 1953, United Airlines, and RCA, developed airborne radar for weather mapping. In October 25, 1955, United placed its first order for the Douglas DC-8s jet aircraft for a total of $17 million.

Another catastrophic incident took place on November 1, 1955. United Airlines Flight 629 was flying from Stapleton Airport in Denver to Portland, Oregon but exploded en route from a bomb that was planted on the plane, killing everyone on board. This tragic event was not a mystery. A man named Jack Graham was found guilty of bombing the plane and was executed a year after the incident.

In June 1961, the airline merged with Capital Airlines to create what was then the world’s largest airline. It then moved its headquarters from Chicago’s Midway Airport to Chicago O’Hare Airport.

As the airline continued to grow and expand, it developed a strong brand presence and began running some fresh and new advertising campaigns. By December 1964, the airline became the first domestic carrier to have a fully automatic, all-weather landing system. This improved operations significantly and set the airline apart from the competition. In October 1965, the airline launched the famous “Fly the Friendly Skies’ advertising campaign.

The 1978 Airline Deregulation Act affected all of the major airlines in a negative way, including United. Economic trouble and labor problems left United with few resources and the airline experienced a high turnover of senior management through the 70s and 80s. Still, it pressed on.

When American Airlines introduced its AAdvantage frequent flier program in 1981, United launched its Mileage Plus program – just a week later. United and American became very competitive and continue to be the primary competitors in the United States market to this day.

By 1984, United Airlines was the first airline to serve all 50 states. It had introduces service to several new destinations, including Atlanta, Memphis, Nashville, Fargo, Little Rock, Casper, Charleston and Jackson.

On May 17, 1985, United’s pilots went on a 29-day strike claiming that the CEO was trying to break up the unions. CEO Richard Ferris attempted to assuage the problem by offering a word-for-word contract that matched American Airlines B-scale pilot pay rate. This ended up being much more generous than American’s pay rates and the issue was resolved in an effort to avoid a strike.

In 1988, United set a new world record, flying a two-stop, around-the-world flight to raise money for the Friendship Foundation. This ended up being the fastest recorded flight around the globe but the record was broken by a Gulfstream IV business jet just a month later.

During the 1990s, United continued to expand rapidly and the decline of Pan American World Airways strengthened United’s position. United was able to purchase many of Pan Am’s routes to London Heathrow Airport and obtained rights to fly from Heathrow to Chicago. Increased competition with low-cost carriers led to some losses in the early 90s, but United continued to grow at a slower pace.

In 1997, United co-founded the Star Alliance group with Air Canada, Thai Airways, Scandinavian Airlines and Lufthansa. It also opened a major hub in Los Angeles that same year. The airline announced plans to acquire US Airways in May 2000. At the time, US Airways was valued at $11.6 billion. However, the merger was considered to be a violation of antitrust laws so United withdrew the offer.

Even though United experienced a boom during the dot-com era, it lost $2,137 million in revenue during this same time period and had to apply for a $1.5 billion loan guarantee from the federal Air Transportation Stabilization Board. Its application was rejected and the company was forced to file Chapter 11 against bankruptcy in December 2002.

Still, United Airlines maintains operations to this day and is working its way through bankruptcy. It has invested in new projects and continues to compete with low-cost carriers and some of the major airlines. It has cut its flight capacity and has increased fares over the years, especially to overseas destinations.

Now, a few ads to finish the story. 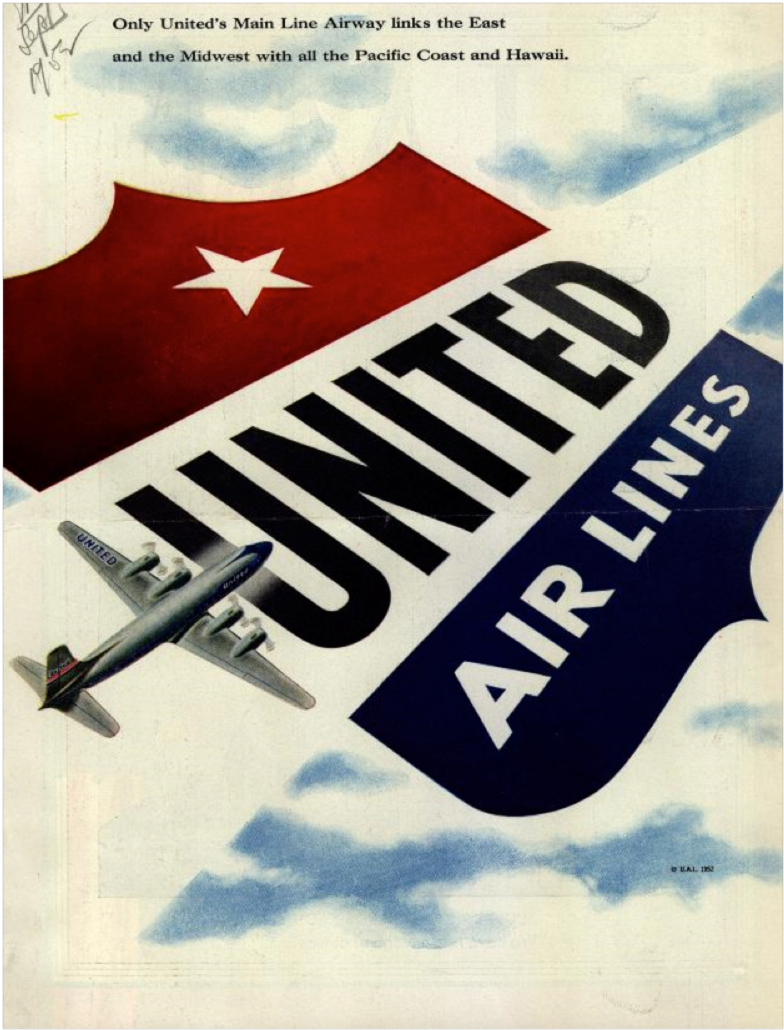 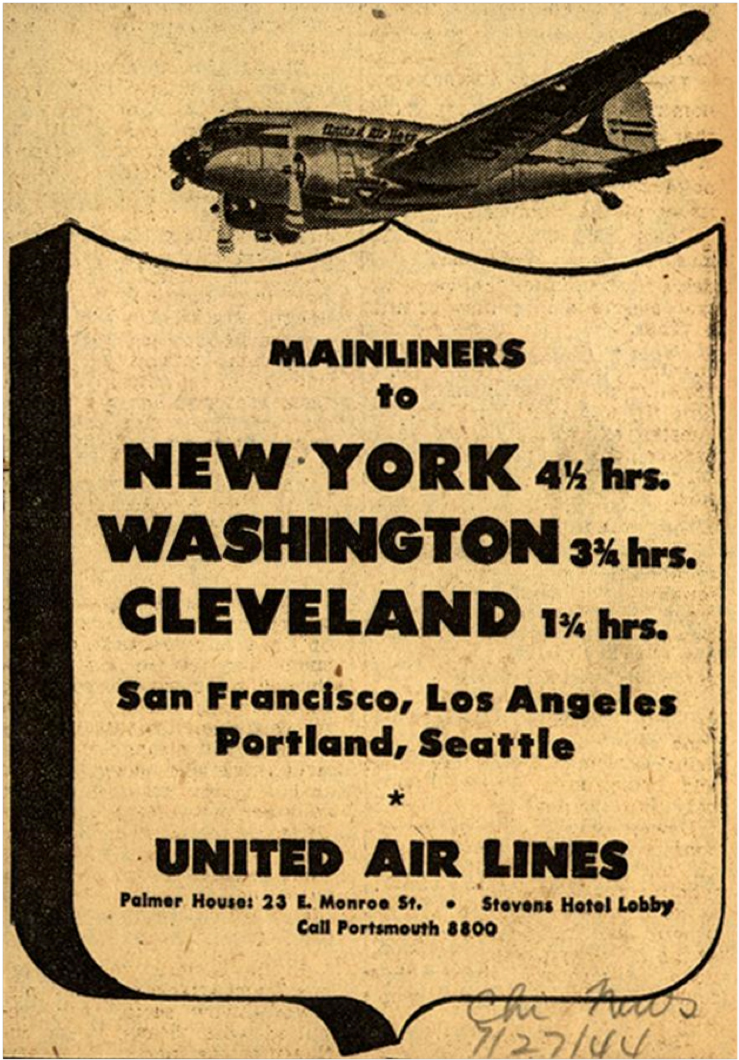 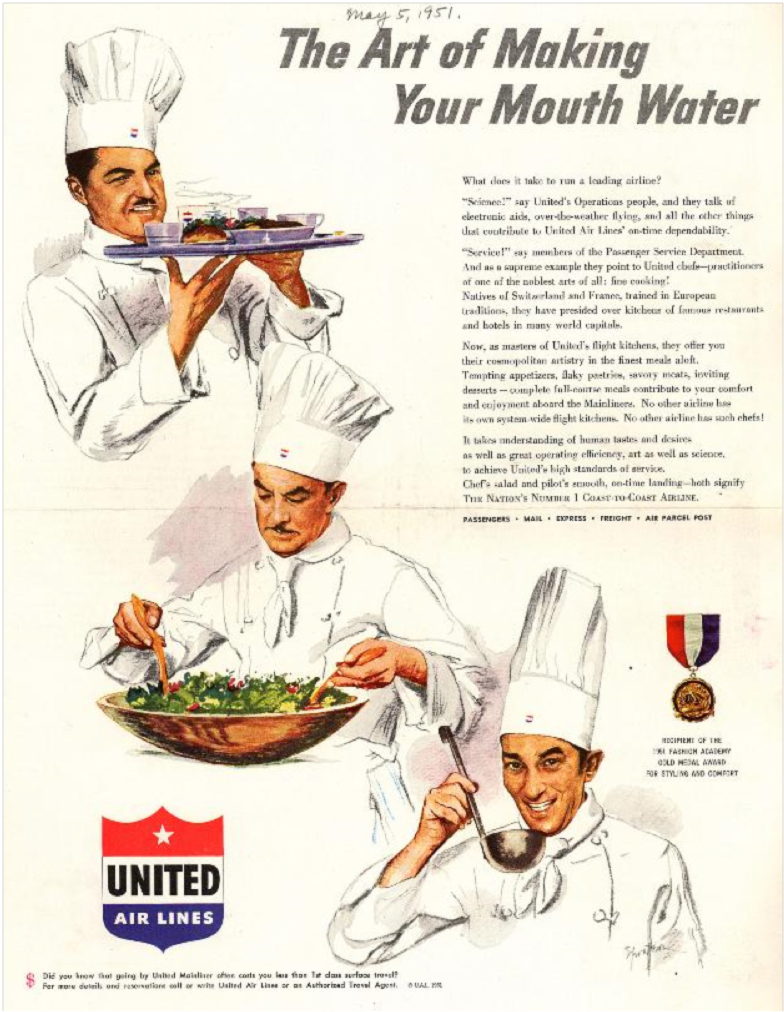 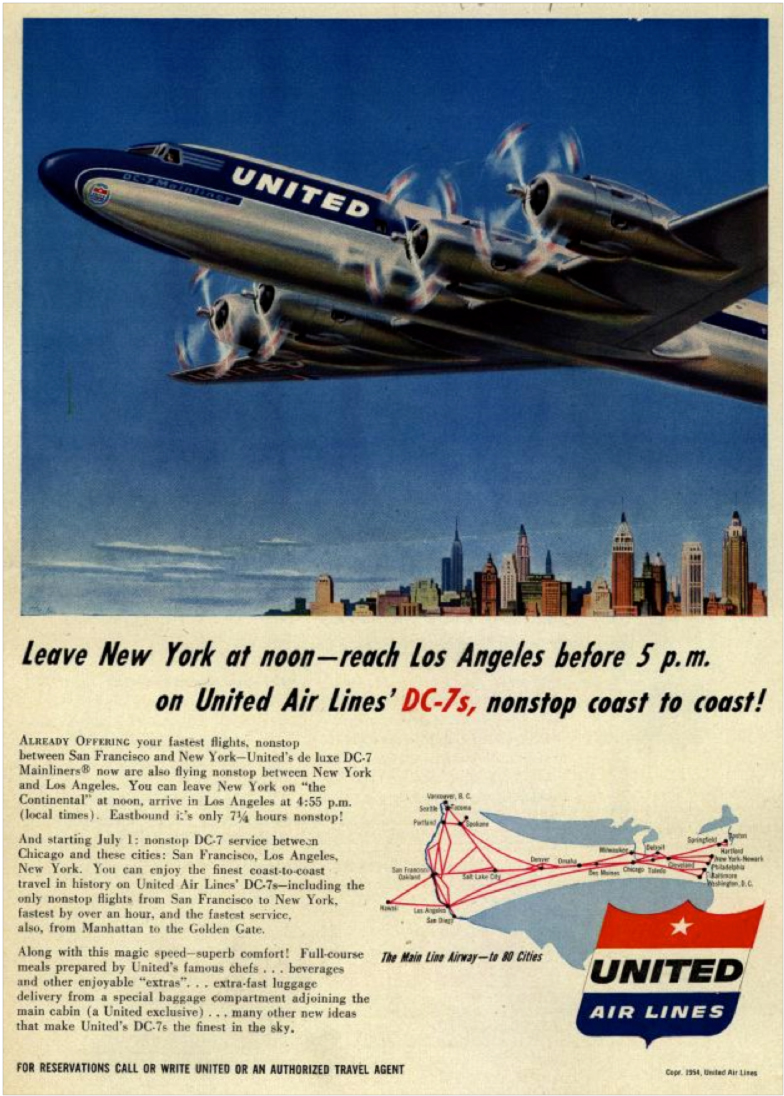 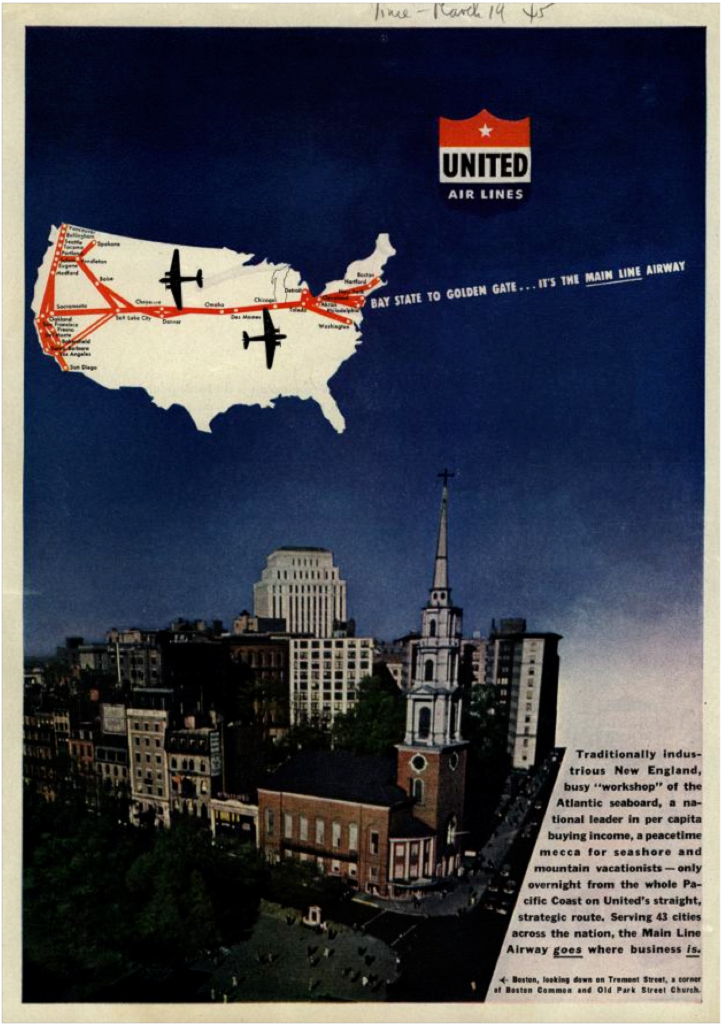 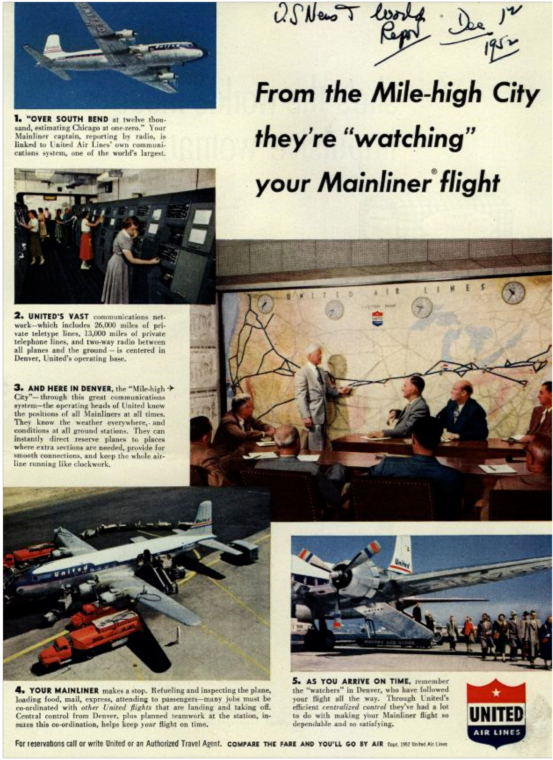 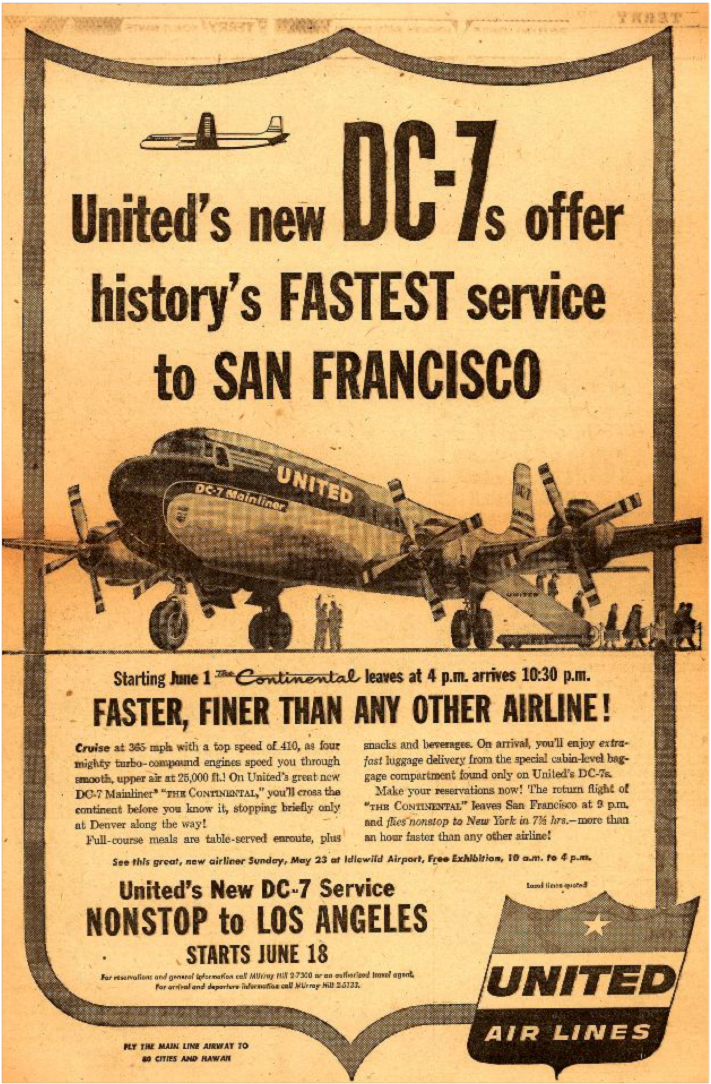 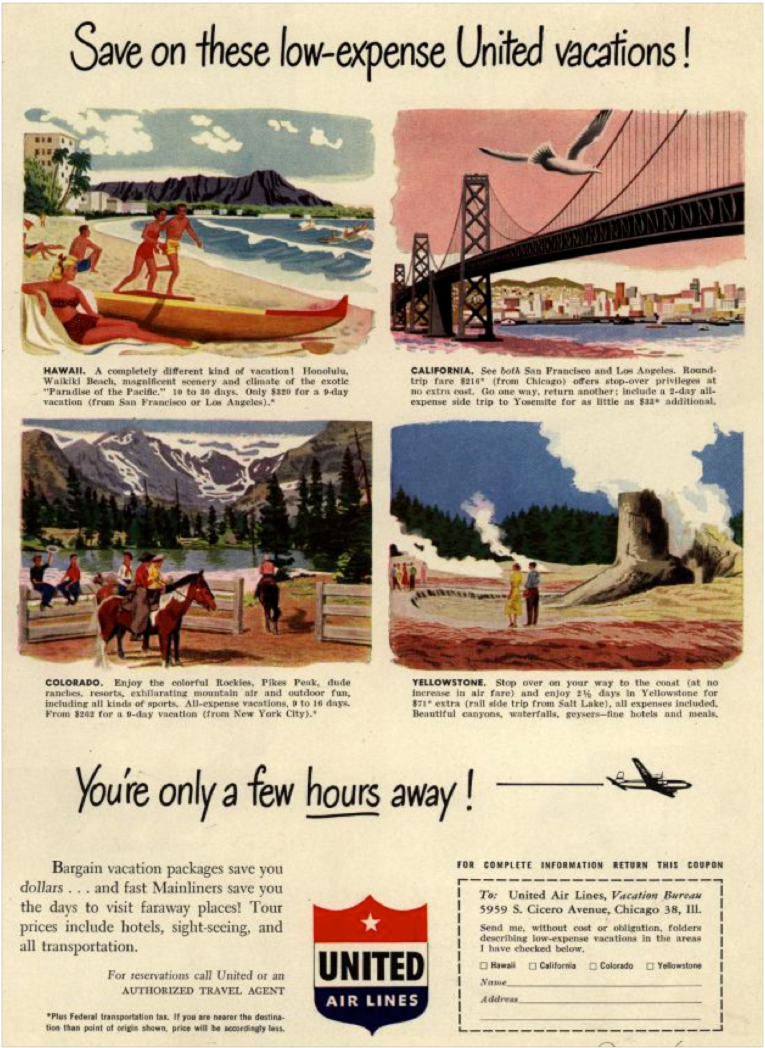 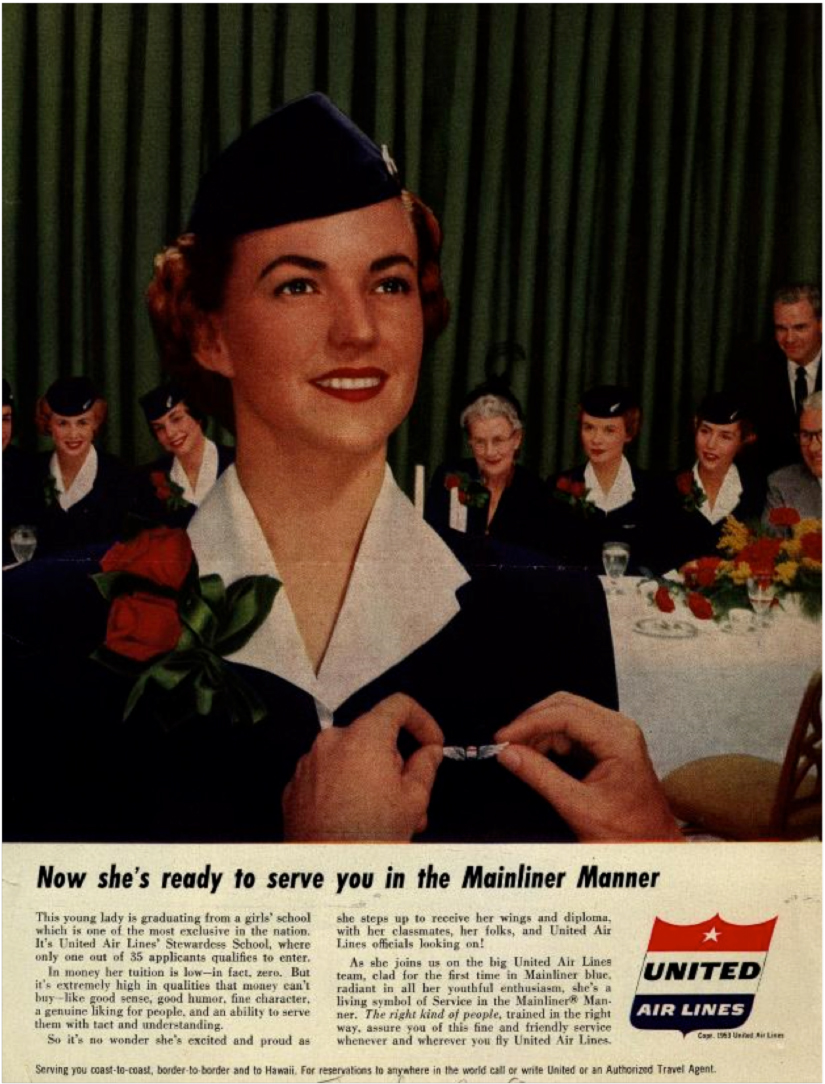 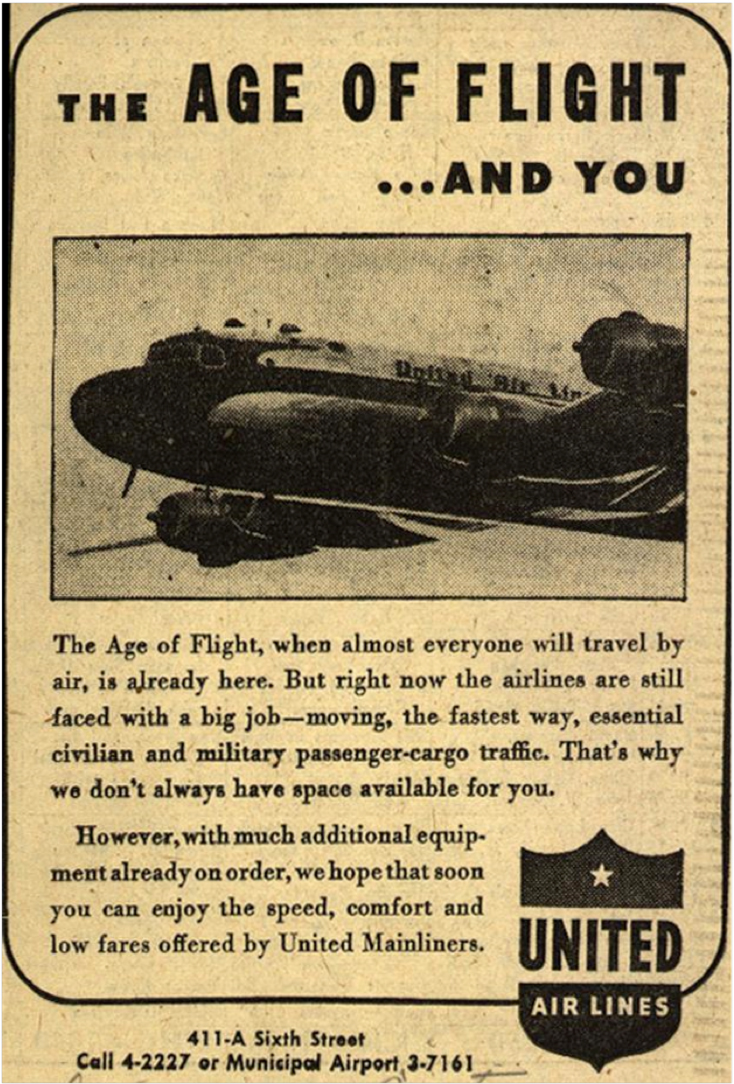 Have a good Friday and join me again next week when we will take a look back at……………….